Newborough CFA to get $1.2 million upgrade 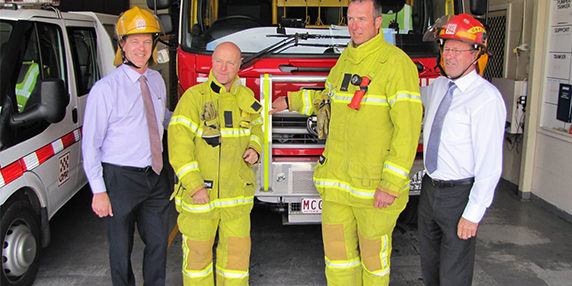 Making the announcement at the Newborough Fire Station, Mr Northe said that the Coalition Government is building a better and safer Victoria and enhancing emergency response capabilities for Newborough and surrounding areas.

“Newborough Fire Brigade is nearly 60 years old. The new station will ensure Newborough’s 26 volunteer firefighters have access to the latest specialist equipment and resources to increase protection for our region and boost their own personal safety,’” Mr Northe said.

“Responding to around 250 callouts each year, for bushfires, structure fires, motor vehicle accidents, and chemical spills, this new facility will provide an important infrastructure asset that will protect life and property for many years to come.

“This is fantastic news for Newborough, as it will significantly enhance emergency services in our area. Newborough Fire Brigade regularly responds to support surrounding CFA brigades at Moe, Yallourn North and Morwell.”

This major investment for Newborough will fund $400,000 for land acquisition and $800,000 for a new station. It builds on the Coalition Government’s proven track record in delivering significant investment in Victoria’s emergency services.

Mr Northe said the announcement builds on the recent delivery of $5 million funding for the new Morwell CFA station.

“I am proud to have delivered an array of fire-fighting resources for the Latrobe Valley area over the past four years including new fire tankers for the Tyers and Glengarry fire brigades; new CFA stations for Cowwarr, Glengarry and Glengarry East; a fire-fighting helicopter based in Traralgon this fire season; additional career fire-fighters and fleet vehicles; and amenity upgrades to a number of stations,” Mr Northe said.

“Since 2010, the Coalition Government has invested $2.29 billion in the CFA, more than any previous government. This financial year the CFA Budget is $457 million, $58 million more than when Labor left office in 2010.

“Under a Coalition Government, Victoria’s emergency management response is better prepared and resourced than ever before.”