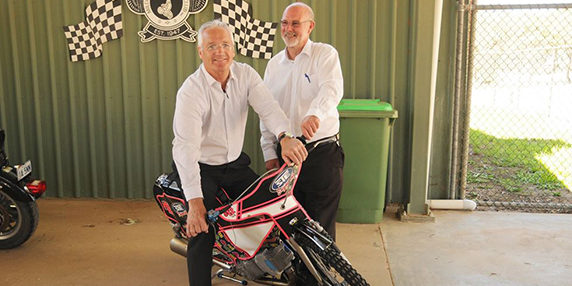 A re-elected Coalition government will bring the 2015 Under 21 Speedway Teams motorcycle championships to Mildura thanks to a $3.5 million boost to the Significant Sporting Events Program, Minister for Sport and Recreation Damian Drum and Member for Mildura Peter Crisp announced today.

Mr Drum said this would be the first time Mildura has hosted a motorsport event of this stature and is just one of many national and international sporting events that will be held in regional Victoria under a re-elected Napthine Government.

“A Napthine Government will provide $100,000 worth of Significant Sporting Events Program funding to bring this world-class event to Mildura,” Mr Drum said.

“”This event is expected to bring more than 2000 visitors from around the world to Mildura and there is a projected economic boost of $5 million to the region from the staging of the Championships.”

“This is why a re-elected Coalition Government will increase funding for the Significant Sporting Events program by $3.5 million over the next four years.  This is in addition to the $4.8 million already locked into the budget.

“Our Government provided an initial Regional Development grant of $200,000 that was leveraged into $580,000 by the club members to upgrade the facility,” Mr Crisp said.

“That initial investment has made Mildura hosting international motorcycle events possible and today we’re thrilled to announce that this will happen under a re-elected Coalition Government.”

“Aside from the economic impact, and the encouragement it will provide for young people to take up the sport, I am particularly excited about the possible worldwidemedia exposure for the Sunraysia.”

“Regional Victoria deserves major sport and it’s the Coalition that works hardest to make that happen.”

An independent review of events held from 2012-2014 found a an average return on investment of 12.8 to 1 from the estimated 68,700 interstate and 7,150 international visitors to events supported by the program., many of these events being held in regional Victoria.