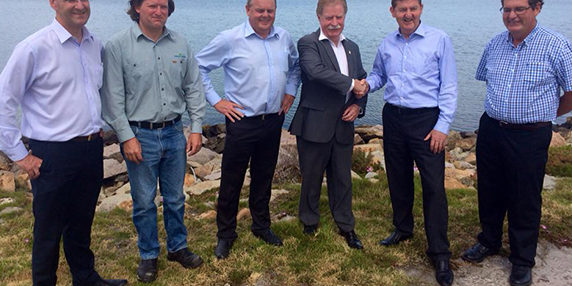 The health of the Gippsland Lakes will continue to be protected and enhanced under a re-elected Victorian Coalition Government, Deputy Premier and Leader of The Nationals Peter Ryan announced today.

Speaking in Paynesville, Mr Ryan said a re-elected the Coalition would invest $8 million into extending the Gippsland Lakes Environmental Fund, which for the past two-and-a-half years has supported important projects that boost the health of the lakes.

Mr Ryan also announced today that the term of the Gippsland Lakes Ministerial Advisory Committee, led by Dr Peter Veenker, would be extended until December 2018.

“The Coalition Government is committed to supporting the health and prosperity of the Gippsland Lakes,” Mr Ryan said.

“So far, we have invested in 66 projects which are either underway or already delivered through the fund.

“This extra funding commitment today from the Victorian Coalition will ensure the Gippsland Lakes can continue to be protected and enhanced over the next four years.”

The Nationals Member for Gippsland East Tim Bull joined Mr Ryan in Paynesville and said the Gippsland Lakes were an iconic attraction in Victoria and he was proud that a re-elected Coalition would continue to protect them.

“As a proud local, the Gippsland Lakes hold a special place in my heart and I am thrilled The Nationals, working in Coalition Government, are continuing to deliver for this important waterway,” Mr Bull said.

“In the past, the lakes have suffered environmental health problems, including the 2008 non-toxic algal bloom which had a direct economic cost of $18 million.

“This funding will help to ensure those kinds of issues are minimised in the future.

“Locals and visitors love the Gippsland Lakes and that is why it’s so important we protect and maintain their health so they can be enjoyed for many more years to come.

“The environmental strategy for the lakes balances the needs of the environment, local communities and industries such as tourism and fishing, and this additional $8 million means we will be able to continue funding important projects that protect this balance.”

The Nationals Member for Eastern Victoria Region Danny O’Brien welcomed the commitment and said this ongoing investment would continue to transform the Gippsland Lakes.

“For all its magnificence, the Gippsland Lakes are Australia’s best kept natural secret,” Mr O’Brien said.

“As Australia’s largest inland network of waterways, the potential to grow tourism and jobs is limitless.

“Only the Coalition Government is committed to improving the health of the lakes for the benefit of all.”