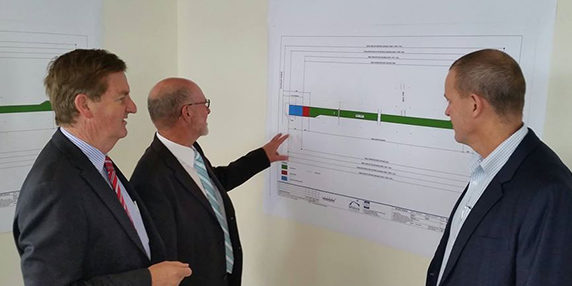 A re-elected Victorian Coalition Government will invest $4.7 million into extending one of Mildura Airport’s two runways to cater for more flights, more often.

Deputy Premier and Leader of The Nationals Peter Ryan joined The Nationals Member for Mildura Peter Crisp at the airport today to make the multimillion-dollar election commitment, from the $1 billion Regional Growth Fund.

“This extension of one of the two runways at Mildura Airport will mean large commercial planes such as Boeing 737s and Airbus A320s will have more room to land and take off in almost all weather conditions,” Mr Ryan said.

“This will accommodate more frequent flights in and out of Mildura Airport to cater for ever-increasing passenger numbers.

“Local member Peter Crisp has been lobbying strongly for further improvements to the Mildura Airport and I am pleased to say today that it will be delivered by a re-elected Coalition.”

Minister for the Aviation Industry Gordon Rich-Phillips said the funding commitment followed $5.2 million provided by the Coalition Government for the Mildura Airport Terminal Redevelopment Project in 2012, which saw the terminal completely remodelled and brought new air services to the region.

“Thanks to the terminal redevelopment, Mildura is now serviced by three major airlines – Qantas, Virgin and Rex – with regular flights to Melbourne, Sydney, Adelaide and Broken Hill,” Mr Rich-Phillips said.

“There are currently 210,000 people using the airport each year and that figure is expected to double over the next decade if patronage keeps increasing at the current rate.”

Mr Crisp said the runway extension would cater for that forecast growth by allowing planes to land and take off safely in all conditions.

“The Coalition Government recognises that the Mildura Airport is at the heart of our region’s economic development and tourism.

“The Liberal-Nationals Coalition is committed to seeing Mildura become even more of a thriving, vibrant regional city and tourist destination.”