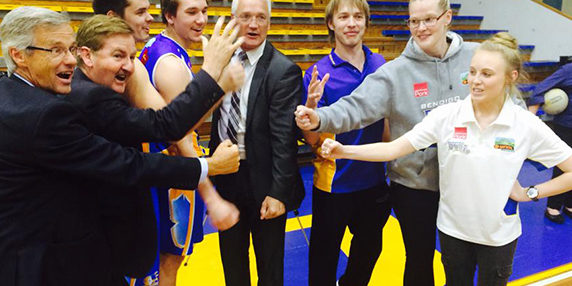 Deputy Premier and Leader of The Nationals Peter Ryan joined Minister for Sport and Recreation Damian Drum at Bendigo Stadium today to announce a $5 million funding boost under a re-elected Coalition Government.

Mr Ryan said the $5 million investment would be provided through the  Regional Growth Fund and would be the catalyst for a $16.5 million project involving Bendigo Stadium Ltd and Bendigo City Council.

“Bendigo Stadium is a hub for community and elite sport in Bendigo and this upgrade will open up a new range of opportunities for the region,” Mr Ryan said.

“This redevelopment will see three new basketball courts that can be converted to a 3000 seat show court, along with 12 new netball courts with change facilities, catering for more than 500,000 annual sports participants.”

Mr Drum said that the upgrades would help grow participation in a number of sports.

“Basketball, Netball and Volleyball will all get additional new facilities, facilities that are needed to keep pace with demand for sport in the city,” Mr Drum said.

Liberal candidate for Bendigo East Greg Bickley welcomed the investment and said the upgrades would see Bendigo attract more events to put the city on the national and international stage.

“These upgrades mean Bendigo can host big sporting and entertainment events all year round.

“Already NBL Basketball and ANZ Championship Netball are on the agenda through interest from Melbourne United and the Vixens, and in addition these benefits will be enjoyed by our own Bendigo Spirit and Bendigo Braves players and fans.”

Liberal candidate for Bendigo West Michael Langdon said the commitment was great news for Bendigo and the new facilities would be an economic driver locally.

“Professional sporting events are one example, but also national and international basketball, netball and volleyball underage tournaments and titles could come to Bendigo, as well as attracting big music and entertainment events,” Mr Langdon said.

“I am proud to be working as part of a strong Coalition Government team which continues to deliver for Bendigo and the Goldfields regions.”