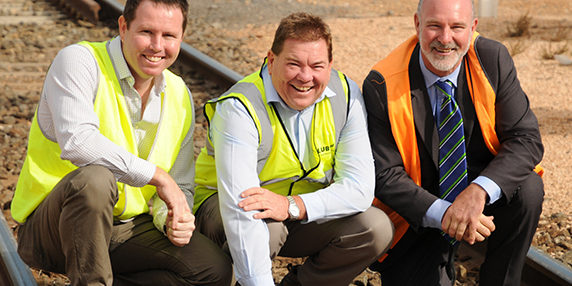 Federal Infrastructure Minister and The Nationals Federal Member for Gippsland Darren Chester this week approved the Commonwealth’s $220 million contribution which will secure the upgrade of this vital freight rail link between north-west Victoria and the state’s ports.

The Murray Basin Rail Project will standardise and upgrade the Mildura, Manangatang and Sea Lake lines and standardise the Murrayville line.

“State and Federal Nationals are proud to have secured and delivered the $440 million needed to deliver this vital upgrade for north-west Victoria,” Mr Walsh said.

“It’s a once-in-a-lifetime opportunity to standardise and repair freight rail in western and northern Victoria, and make it more efficient for farmers to get their product to port.

“It is disappointing that the Andrews Labor Government hasn’t followed through with the same strong support as we’ve seen from the Federal Liberal Nationals Government.

“But now the final $220 million has been officially signed off, there aren’t any more go slow excuses for the State Labor Government.”

The Nationals Federal Member for Mallee Andrew Broad said the rail upgrade would improve freight efficiency for producers in the Wimmera, Mallee and Mildura regions.

“Approximately $3 billion worth of food, fibre and minerals is exported from the Murray Basin annually,” Mr Broad said.

“These works will provide measured improvement in productivity and connectivity, and significantly enhance international competitiveness of Murray Basin producers.”

The Nationals State Member for Mildura Peter Crisp welcomed the flow of funding and said the Andrews Labor Government must now deliver the project on time and on budget.

“The Nationals at the State and Federal levels have worked hard to secure a project that will transform the way we get our agricultural products and other freight from north-west Victoria to the rest of the world,” Mr Crisp said.

“Importantly, this critical project will also reduce the number of trucks on our highways, making our roads safer for all road users.”

Nationals Senator for Victoria Bridget McKenzie said these works would make it more economical for farmers to do business in western and northern Victoria.

“These works are firmly aimed at better connecting goods produced in north-west Victoria with the ports of Melbourne, Geelong and Portland,” Senator McKenzie said.

“The Murray Basin Rail Project will open new export opportunities for our producers and businesses in north-west Victoria by providing a reliable and efficient way to get their product to market.”

The project schedule indicates the works should be completed by late 2018.