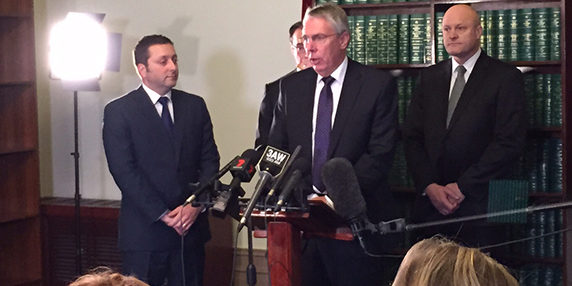 The Liberal-Nationals Coalition cannot support the Melbourne Labor Government’s proposed sale of the Port of Melbourne in its current form.

It is a dud deal for Victorians, particularly country Victorians, and would damage the competitiveness of our export sector.

Victoria is the freight and logistics capital of Australia, with the Port of Melbourne handling around 36 per cent of the country’s container trade.

Victoria’s food and fibre industries, particularly dairy, are some of the biggest users of the port.

Daniel Andrews’ proposal exposes Victorians to a massive compensation payout if a second container port is developed in the next 50 to 70 years.

Creating a monopoly for the next 70 years by restricting the development of a second container port creates a real risk that Victoria will lose trade and jobs to Sydney and Brisbane.

It would also lead to higher costs for exporters, which would be passed straight back to farmers. We have already seen port fees tipped to rise by around 800 per cent in one hit.

This deal would be a noose around the necks of all Victorians and future governments for 70 years.

This is not the proposal that Daniel Andrews took to the election. The only debate before the election was whether Victoria’s second container port should be built at Hastings or Bay West.

The current proposal just adds to Labor’s herd of white elephants and dud deals, including the desalination plant, Myki and north-south pipeline.