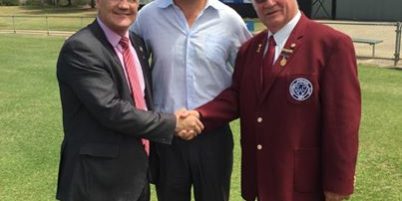 Minister for Sport and Recreation Damian Drum joined Nationals candidate for Ripon Scott Turner and Liberal candidate for Ripon Louise Staley, to announce that under a Coalition Government the future of the Stawell Gift will be secured through increased funding to the Significant Sporting Events Program.

The oldest professional footrace in the world, the Stawell Gift held over Easter is one of Australia’s most iconic sporting events and will be one of many national and international events that will be held in Victoria under a Coalition Government.

Mr Drum said that these events bring economic benefits to the state as well as inspire Victorians to get involved in sport.

“The Stawell Gift brings people from across Victoria, Australia and the world to the region with economic, social and health benefits flowing,” Mr Drum said.

“This is why the Coalition has increased funding for the Significant Sporting Event Program by $3.5 million over the next four years.

“This is in addition to the $4.8 million already locked into the budget. The Stawell Gift will benefit from $150,000 worth of funding each year for the next four years and a commitment from the Government to work with the Stawell Athletic Club to make the event financially sustainable into the future,” Mr Drum said.

Mr Turner said that the Stawell Gift is an important event for the region and the benefits will be felt by the whole community.

“The Stawell Gift is our iconic major event, the event that showcases to all of Australia what the region has to offer, it is vital economically and for us to develop further tourism,” Mr Turner said.

“Not only will a Coalition Government secure the Gift for the next four years, but the commitment to work on a sustainable model for the future means the event can start to plan forward and become bigger and better.”

“A Coalition Government gives regional Victoria a true voice, and program and events such as the Stawell Gift are unashamedly viewed as a way to inject tourism benefits for regional areas that can hold and support sporting events as well as anywhere in the city,” Mr Staleysaid.

“Regional Victoria deserves major sport and it’s the Coalition that will work hard to make that happen.”

An independent review of events held from 2012-2014 found a an average return on investment of 12.8 to 1 from the estimated 68,700 interstate and 7,150 international visitors to events supported by the program. Many of these events are held in regional Victoria.