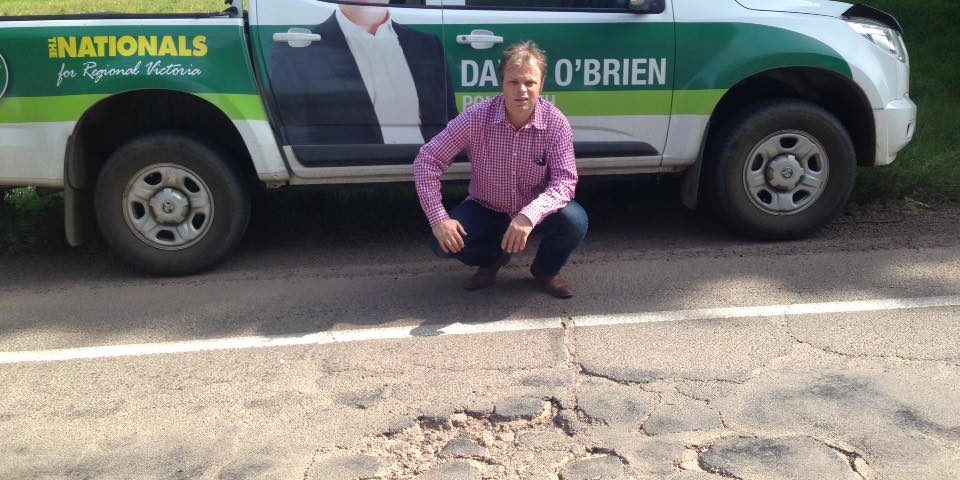 The state of Foxhow and Ayresford  roads, is a major concern to the local community and must be addressed as a matter of urgency according to the Nationals candidate for Polwarth, David O’Brien.

Mr O’Brien, who made a strong declaration to make roads his number one priority at his campaign launch in Camperdown two weeks ago, is calling on the local community to attend a roads forum in Simpson on Thursday evening.

“I am in no doubt that roads is the number one issue for people in Polwarth at the moment and I am calling on the Andrews government to take action right now to get this road fixed,” said Mr O’Brien.

Mr O’Brien also responded to Corangamite Mayor Chris O’Connor’s, recent comments on the lack lustre of election campaign and stating the was disappointed with the Mayor’s comments.

“I have been calling for the planning for the necessary upgrades and duplication of the Princes Highway including the consideration of Mr O’Connor’s 2:1 option to commence, since I announced my candidacy for Polwarth.

“In fact I discussed the matter with him in person on the day of my campaign launch.  The first step is to have the road recognised as an Auslink status road,” Mr O’Brien commented.

“I listen to the local community and I act.  That is why I am inviting Mayor O’Connor and all interested members of the community to attend my Roads Forum in Simpson on Thursday evening.

We need to stand together on this, and if elected I will make personal representations to the State Minister and work with my Nationals colleague in Canberra, Deputy Prime and Minister for Infrastructure, Warren Truss, to see that the Princes Highway duplication to Warrnambool is everyone’s number one priority,” Mr O’Brien declared.

“Right now though the Andrews government should be pushing Vic Roads to fix Foxhow Road, and address the state of Ayresford Road.  These roads are hazardous and they need to be fixed immediately,“ stated Mr O’Brien.