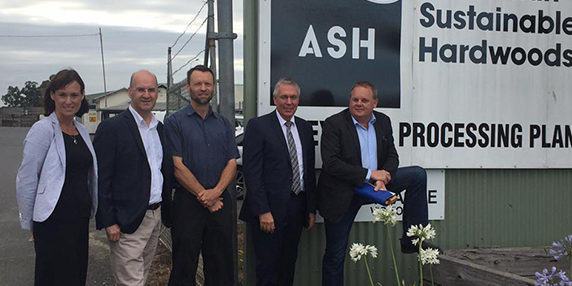 Australian Sustainable Hardwoods has announced today it will close its Heyfield mill earlier than planned.

ASH confirmed today the mill will wind down from August due to “VicForests expected short supply of logs to the mill again this year”.

At a recent hearing for the parliamentary inquiry into VicForests, VicForests Acting CEO Nathan Trushell confirmed the amount of timber available to industry has dropped by nearly 60,000m3 due to confirmed possum sightings and projected future sightings.

Mr Trushell also said the possum was being discovered at a rate “much higher than ever anticipated”.

There are 260 people employed at the Heyfield mill, while the mill’s operations support 7000 jobs down the line.

Leader of the Opposition Matthew Guy and Member for Gippsland East Tim Bull visited the Heyfield mill again today to speak with ASH.

Comments attributable to Leader of the Opposition Matthew Guy

Daniel Andrews’ promise to fight for every Victorian job was clearly a lie. The Andrews government has presided over thousands of lost Gippsland jobs with no remorse for their failure to step in and save them.

The Premier for Melbourne is so desperate to keep his own job and the greens preferences that got him there that he is condemning 260 jobs in the Heyfield community.

The closure of the Heyfield mill is devastating news for the workers, their families and the Heyfield community.

Daniel Andrews promised to visit Heyfield in February, but more than three months later he still refuses to show any support for our community.

The Premier for Melbourne fails to understand the mill doesn’t need a new owner to save these jobs, it needs a change in government policy.