Community celebrates dumping of the dump 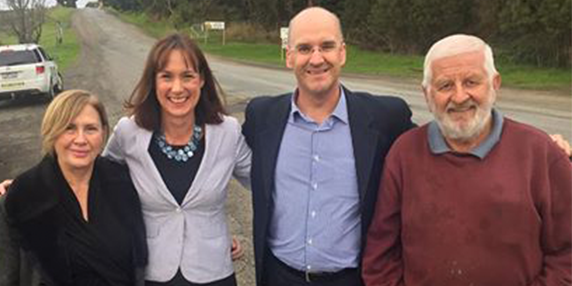 The Nationals MPs Danny O’Brien and Melina Bath have congratulated the South Gippsland community on a successful campaign to ‘dump the dump’ at Leongatha South.

Mr O’Brien and Ms Bath joined community campaigners at the site after news that multinational waste firm Veolia had abandoned any plans it had to pursue the proposed rubbish dump in a disused quarry.

“This was a project that was sprung on the community by Veolia and presented as something of a done deal. What the company didn’t anticipate was the fantastic community campaign that mobilised almost instantly to oppose the dump,” said Mr O’Brien.

“I was please to table in State Parliament almost 3,000 petitions against the proposal and the community campaign made it clear that South Gippsland did not want Melbourne’s waste.”

Ms Bath said, as a local resident, she was equally concerned about what the dump would have meant.

“I give great credit to the Dump the Dump group which pounded the pavement, collected signatures and prepared a significant campaign against the dump idea.

“I also pay tribute to the businesses that hosted the petitions and leant their support to the campaign.”

Mr O’Brien said neither the Gippsland nor metropolitan waste planning groups had accepted the need for the dump at Leongatha South, denting any credibility it had to proceed.

“We know we have to reduce the amount of waste going to landfill and Gippsland will accept the responsibility for dealing with its own waste – Melbourne should too.

“I am disappointed that having raised community anxiety about this issue, that it took follow up from us to confirm it was now dead. That is disrespectful to the community and Veolia’s behaviour in this case has been poor.”