Nationals to withdraw Victoria from controversial Belt and Road 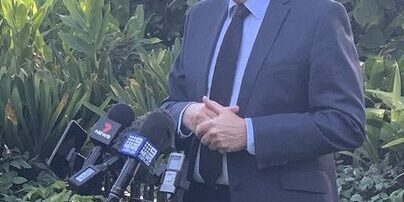 A Michael O’Brien-led Liberal and Nationals Government will withdraw Victoria from Labor’s lop-sided and secretive Belt and Road deal with the Chinese Government.

This is not a decision that has been taken lightly. But it is the right decision for Victoria.

The Belt and Road deal is not in Victoria’s interests. It doesn’t support our sovereignty, our security or our jobs.

The lop-sided terms commit Victoria to “increasing the participation of Chinese infrastructure companies in Victoria’s infrastructure construction program” but has no equivalent commitment on the Chinese side. Instead, we get platitudes limited to “promoting of Victorian firms in China”.

While Chinese Government-owned companies have been given contracts to build the Metro Tunnel, the botched West Gate Tunnel and remove level crossings, Victorian farmers have been slugged by a punitive 80 per cent tariff on barley exports to China.

Labor’s Belt and Road deal is all one-way traffic – and Victoria is driving the wrong way.

The Liberals & Nationals remain committed to promoting trade and investment in Victoria around the world, including with China.

Under an O’Brien Liberal and Nationals Government our engagement with China will be based on mutual interest and fair dealing – not deals that pit another nation’s strategic interests against Australia’s.

Daniel Andrews refuses to answer how much of his $25 billion in new borrowings he will source from China and what the obligations will be.

Daniel Andrews refused to seek advice from national security agencies before signing his latest deal with the Chinese Government.

I will not stand by while Daniel Andrews puts party and ego before Victoria’s interests.

That is why a Michael O’Brien-led Liberal and Nationals Government will end Labor’s Belt and Road deal with China.

Comments attributable to the Leader of the Opposition, Michael O’Brien:

“We have assessed Daniel Andrews’ Belt and Road deal with China looking at sovereignty, security, the economy and jobs.

“On that assessment, Daniel Andrews’ BRI deal with the Chinese Government is not in Victoria’s interests and a Michael O’Brien-led Liberal and Nationals Government will end it.

“Victoria’s interests must come first. A dud deal that compromises jobs, security and sovereignty is not a deal that I can support.

“We will maintain a strong trading relationship and partnership with China, based on genuine mutual interests, not secretive political deals.

“We are confident that a positive engagement with China will continue.”

Comments attributable to the Leader of the Nationals, Peter Walsh:

“The Liberals and Nationals will always put the interests of Victorian workers, farmers and businesses first.

“We will maintain a strong trading relationship and partnership with China, based on genuine mutual interests, not political deals.

“A deep economic and cultural engagement with China is in Victoria’s interests but first we need to get out of this secret MOU that binds Victoria to the political interests of the Chinese Government – against the advice of the Australian Government and independent observers.”