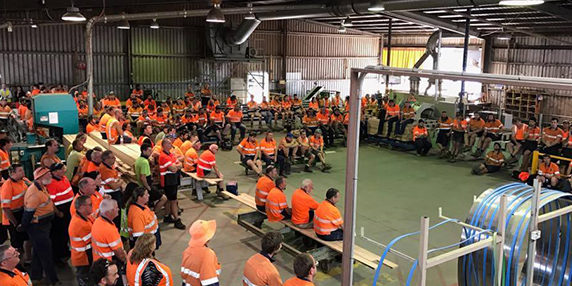 The Andrews Labor Government has broken its promise to the Heyfield community that jobs will not be lost at the Heyfield mill.

In Parliament today, Agriculture Minister Jaala Pulford failed to stand by a promise from Labor’s Member for Eastern Victoria Harriet Shing in March that the mill would “not lose jobs overall” if it was sold to the Government.

Ms Pulford worked hard to shift the blame for the Andrews Labor Government’s role in putting jobs at the Heyfield mill in jeopardy.

Shadow Minister for Agriculture Peter Walsh said the process to sell the Heyfield mill had gone on for too long.

“Heyfield mill workers have been forced to put their lives on hold while the Andrews Labor Government drags its heels on the sale negotiations,” Mr Walsh said.

“If Jaala Pulford worked as hard to finalise the mill sale as she did in Parliament to shift the blame for jeopardising country jobs, the sale would already be finalised.

“The only jobs Labor care about are those of their inner-city MPs who will rely on Greens preferences to hold their seats at next year’s election.”

“The kick in the guts is that the sale of the Heyfield mill never had to happen in the first place – the timber supply is there.

“Yet again it’s clear that Labor is sacrificing jobs in the country for its own political survival.

“The Andrews Labor Government must urgently confirm none of the 250 jobs will be lost under its ownership.”