Help for Homeless on its way 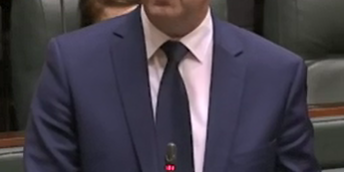 Help for Homeless on its way

The Nationals Member for Gippsland South, Danny O’Brien says he is hopeful help is on its way to assist with Gippsland’s growing need for crisis accommodation and community housing.

In Parliament last month Mr O’Brien asked the Minister for Housing to work with the Minister for the Prevention of Family Violence to ensure housing needs in the Wellington Shire area are met, following a noticeable increase in calls for assistance from local people at risk of homelessness.

“I’ve now received a response from the Minister for Housing indicating that 18 new houses are on their way for the Wellington Shire area,” Mr O’Brien said.

“I am told a further $40.2 million will be put towards crisis accommodation and specialist services for people experiencing or at risk of family violence as well as $10 million to enhance new and existing activities to support women and children escaping family violence.

“While this will by no means solve the growing issues surrounding homelessness in the Wellington Shire area or the broader concerns around domestic violence and it’s causes, it is a step in the right direction.

“The Minister also advised that 3,000 of the 12,000 new social houses promised in the recently announced $5.3 billion Big Housing Build program will be built in regional areas such as Gippsland over the next four years.”

Mr O’Brien said it is positive to see money being allocated to areas where it is so desperately needed.

“I am hopeful that these promises will come to fruition and translate into a real difference for the vulnerable members of our community as well as reduce some the of the strain on our local service providers.

“It has been pointed out to me by at least one non-government agency that a huge number of people are looking for housing including emergency housing as a result of the COVID situation.

“Local Department of Health and Human Services staff and the various non-government agencies working in this space do their best, but they are under severe pressure.

“I know of one agency that had already spent it’s entire crisis care budget for the current financial year by October.”

Mr O’Brien said there was a likely correlation between increased instances of family violence and the number of women looking for emergency housing.

“One of the issues this government has focussed on, and I give it due credit for, is tackling family violence.

“I’m hopeful that this commitment from the Minister for Housing will provide the urgently needed emergency accommodation for those fleeing violent situations, which is lacking in our area.

“There is certainly a cohort in the community that are struggling to find a roof over their head at the moment and I’m keen to work with the government to ensure we have adequate public housing and emergency housing for those in need.”