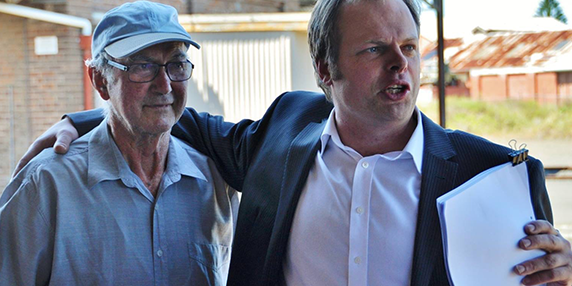 Please join us for an afternoon of discussion with Guest Speaker Senator Bridget McKenzie along with Leader of The Nationals Hon Peter Walsh.

Meal and drinks can be purchased at the hotel

William Patrick “Bill” Bateman (1933 – 2016) was a member of the Country Party/The Nationals serving at the local Branch, Polwarth Assembly District Council and Victorian State Council levels for many years. Bill was a member of the Board of Management for the Party and at the 2003 State Conference, in Hamilton, was awarded Life Membership of the Party.

Bill was actively involved in numerous campaigns for The National Party candidates throughout Western Victoria for several decades. The photo depicts Bill, at the age of 81, campaigning with David O`Brien, The Nationals candidate for Polwarth at the 2015 by-election.

While the function is being organised by the Corangamite Federal Electoral Council of The Nationals for Regional Victoria it is open to all of Bill`s friends and members of the general public, irrespective of their political inclinations (as Bill would have desired).

Following lunch the guest speaker will be Senator Bridget McKenzie, The Nationals Senator for Victoria, whose theme(s) for the inaugral Bill Bateman lecture will include “Decentralisation” which was one of Bill`s passions. This will be followed by a Question and Answer Session also involving the Hon. Peter Walsh MLA for Murray Plains and the Parliamentary Leader of The Nationals in Victoria chaired by David O`Brien.

This function is an excellent opportunity to meet and speak with a key Senator in the Federal Government and the man who is the Deputy Opposition Leader in the Victorian State Parliament.

The Corangamite Federal Electoral Council of The Nationals for Regional Victoria are delighted to host this function in recognition of Bill Bateman`s service to his party which has represented and fought for the interests of regional Victorians in the State Parliament for 100 years.