Up to $700 million secured for regional Victoria 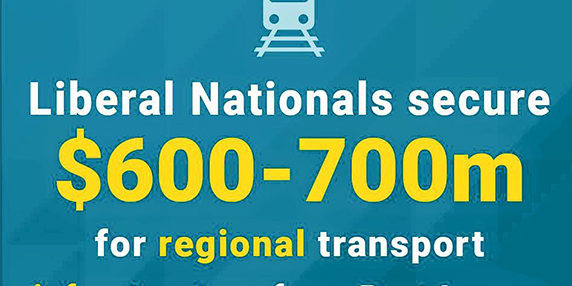 The Liberal-Nationals have secured three times as much funding for regional Victoria from the sale of the Port of Melbourne lease than was offered by Daniel Andrews.

The Liberal-Nationals will support an amended version of the Delivering Victorian Infrastructure (Port of Melbourne Lease Transaction) Bill 2015 in Parliament.

In those amendments we have secured 10 per cent of port sale proceeds – or up to $700 million – for transport infrastructure projects in regional Victoria.

That’s compared to the paltry 3 per cent – or $200 million – originally offered by Daniel Andrews, and welcomed by the VFF president.

After countless empty threats by Treasurer Tim Pallas, Labor has finally backed down and agreed to our sensible proposal which will deliver a better deal for all Victorians.

Unlike the city-centric Andrews Labor Government, the Liberal-Nationals stand up for regional communities and fight for their fair share.

Daniel Andrews’ proposal to send 97 per cent of the port sale proceeds to level crossing projects Melbourne was not a fair deal.

We will not accept the scraps off the table thrown to regional Victorians by the Andrews Government.