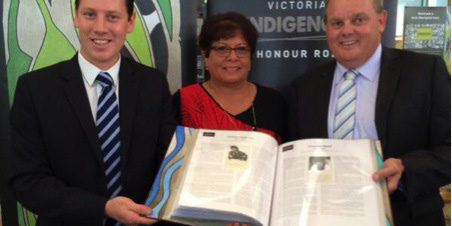 Minister for Aboriginal Affairs Tim Bull said the Honour Roll, now in its third year, is part of the Victorian Coalition Government’s commitment to closing the gap between Aboriginal and non-Aboriginal people.

“It is a privilege to open the road show because it provides an opportunity to share the powerful stories of the inductees with the Victorian community and to encourage further nominations from across the state,” Mr Bull said.

“The Honour Roll recognises the achievements of Aboriginal Victorians past and present who have been high achievers in the fields of art, sport, education, health, community service and military service.

“I encourage Ballarat residents to visit the library to have a close look at the Honour Roll, which is normally on display in the Victorian Parliament, and to learn more about the lives and achievements of those who have been inducted.”

Mr Bull spoke at the opening ceremony about Valmai Heap, a posthumous 2013 Honour Roll inductee, who was the first Aboriginal person employed by Museum Victoria and who later went on to become Administrator at the Ballarat and District Aboriginal Cooperative in the 1980s.

“Valmai Heap was a role model for women of all ages and I know that through her story Victorians will be inspired to build a stronger community.”

The Victorian Indigenous Honour Roll will be at Ballarat Library until 21 March and will then travel to Traralgon, Bendigo, Dandenong and Echuca over an eight-week period.

The closing date for 2014 nominations is Friday 23 May 2014 and more information is available at www.dpc.vic.gov.au/vihr